To share your memory on the wall of Gene Conner, sign in using one of the following options:

Provide comfort for the family of Gene Conner with a meaningful gesture of sympathy.

Gene attended Waco Tech High and worked at Genham’s Drug before and after school where he would open the drug store and even compound drugs for the pharmacist. After his father passed away, he enlisted in the U.S. Navy at the age of 16 (although the Navy thought that he was older) in December of 1951. He was first assigned to the USS Pine Island. He left the Navy the first time in 1961 and returned to Waco where he met Linda Darlene Buckner while they both worked at the First National Bank of Waco and they married on December 29, 1962, and had a son Richard Lee Conner.

He reenlisted in the Navy in 1964 where he served aboard the USS Niagara Falls. He was later stationed on NAS Midway Island in the Pacific as a senior enlisted with the highest security clearance on the island, where he was able to be accompanied by his wife and son. He ended his Naval career as a Chief Petty Officer, with the Naval Justice Center at NAS Corpus Christi Texas, where he retired and moved his family to Robinson, Texas.

Gene became a man at the age of 15 and from that point on carried the responsibilities of an adult. And strived to do nothing but the best every time. He was incredibly devoted to his wife Darlene and son Richard and grandson Garrett.

We encourage you to share your most beloved memories of Gene here, so that the family and other loved ones can always see it. You can upload cherished photographs, or share your favorite stories, and can even comment on those shared by others.

Posted Jun 14, 2019 at 04:32pm
We love you and we will miss you deeply, but we will carry you in our hearts forever. Love, Cheryl Retzlaff, Shelley & Family and Shane & Family.

Flowers were purchased for the family of Gene Conner. Send Flowers

Flowers were purchased for the family of Gene Conner. Send Flowers 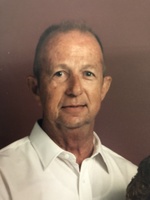